Nanjing University and the University of Sheffield will strengthen their ties and explore new models of cooperation in new areas, agreed Hu Jinbo, secretary of CPC’s Nanjing University committee, and Koen Lamberts, president & vice-chancellor of Sheffield, and his delegations, when Hu received the British visitors on Gulou Campus on March 4.

Li Xiaorong, director of the Office of International Cooperation and Exchange, was present at the meeting. 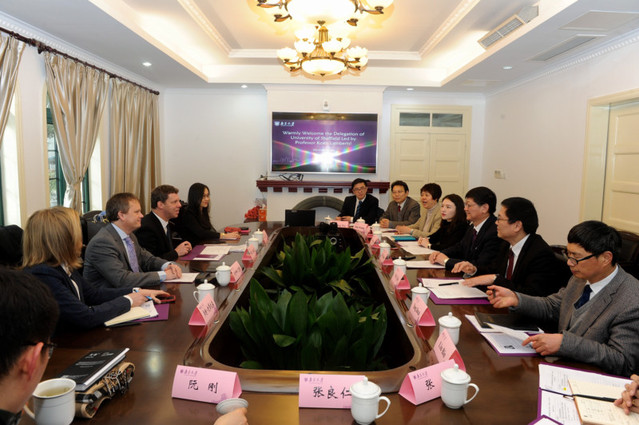 Hu extended his congratulations to President Lamberts on his appointment as Sheffield’s president.

He reviewed the cooperation between the two universities in fields of electronic science and engineering, international studies, engineering and applied sciences and in co-construction of the Confucius Institute.

Hu also briefed the British friends on the achievements Nanjing University has been making under the “Double First-Class” (first-class universities and first-class disciplines) Plan.

China and the United Kingdom have made many achievement in educational cooperation since the start of the China-UK High Level People-to-People Dialogue in 2012, Hu pointed out, and the visit of China’s President Xi Jinping to the UK in 2015 ushered such cooperation into a “golden era.”

This was the time when the idea came into being of establishing a Jiangsu-Russell Group Innovation & Entrepreneurship Alliance, an idea that took into account China’s national strategy of promoting innovation-driven development, the support by Jiangsu provincial government and Nanjing municipal government, and the strength of Nanjing University itself.

Hu proposed that Nanjing University and the University of Sheffield join hands in building a joint international school.

President Lamberts responded favorably to the proposal and said he would carefully study it in the next few months and would give his feedback as early as possible. President Lamberts commented by saying that he will consider offering university-level support for these cooperation programs.

The University of Sheffield, he said, is willing to work with Nanjing University to expand areas of cooperation and to utilize research achievements to better serve society.

(Office of International Cooperation and Exchange)