Nanjing University’s president Academician Lyu Jian visited the Harvard-Smithsonian Center for Astrophysics and University of California, Los Angeles and Irvine, from November 10 to 16.

On November 11, Lyu and his group visited the Submillimeter Array (SMA) at Mauna Kea, Hawaii, the United States.

SMA was established and operated by Harvard-Smithsonian Center for Astrophysics and is the first astronomical interferometer in the world to operate at submillimeter frequencies and to this day is still the only one in the northern hemisphere.

Nanjing University’s School of Astronomy and Space Science has had long-term partnership with the center and has an agreement with the center on research cooperation based on SMA.

In recent years, the two sides have jointly published a number of high-quality papers on international journals and have been engaged in comprehensive cooperation in talents cultivation and academic exchange. 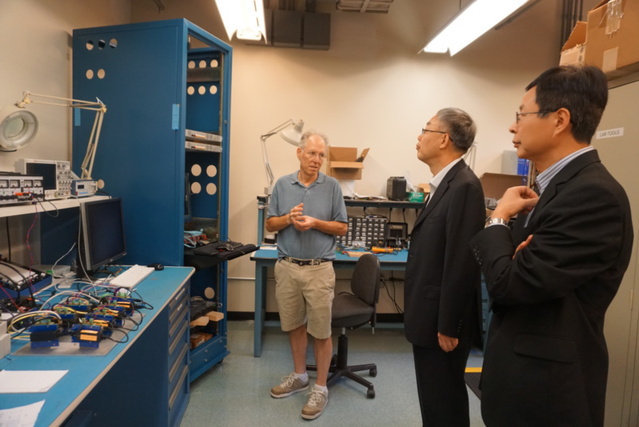 President Lyu and others first visited the SMA Remote Control Office and the Submillimeter-Wave Technology Laboratory in Hilo, Hawaii.

Dr. Simon Radford, director of the SMA operation department, and Professor Zhang Qizhou, senior astrophysicist of the center, briefed in detail on the construction and maintenance of SMA, the upgrading of the terminal instruments and their representative research achievements.

In the afternoon, Lyu and his group arrived at Mauna Kea Observatories’ transfer station which is located halfway of the mountain at an altitude of 2,800 meters and later reached the summit at 4,100 meters, where sits the best observatory of the northern hemisphere.

Accompanied by Dr. Radford and Professor Zhang, the Nanjing University group visited the eight dishes of SMA, the receiver cabin and the observation room of the telescopes so as to learn about submillimeter-wave superconducting refrigeration receivers, optical cable data transmission and real-time observation procedure.

They also visited a computer cluster for processing and analyzing big data and a terminal instruments maintenance laboratory.

President Lyu shared his thoughts about big data, artificial intelligence, radio astronomy data processing and how to carry out original research with the world-class facilities.

On November 13 and 14, President Lyu and his group visited two research universities of the University of California system, UCLA and UCI. 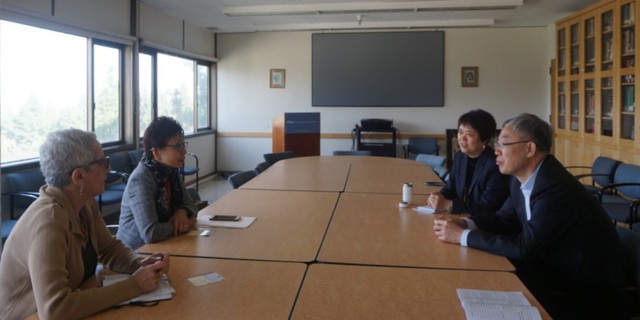 Cindy Fan, vice president in charge of international affairs at University of California, Los Angeles, received the delegation and conveyed the greetings from President Gene Block.

At the meeting, both sides looked back at the fruitful cooperation between Nanjing University and UCLA in atmospheric sciences, astronomy and life sciences over many years,

President Lyu officially invited President Gene Block to “the First Jiangsu Meeting of Presidents of World-Renowned Universities,” which will be held at Nanjing University in May 2020.

The two sides reached an agreement on the signing of a memorandum on comprehensive cooperation.

President Lyu and his group met with Professor Chen Yong, an alumnus of Nanjing University who showed the group the laboratories of the School of Engineering. The group learned in detail about the subject focuses of UCLA’s engineering sciences and discussed the mechanisms and projects of cooperation between the two universities.

During the meeting with leaders of the University of California, Irvine, the two sides mainly talked about the “3+2” graduate-level joint cultivation program carried out by UCI and Nanjing University’s College of Engineering and Applied Sciences.

With this program, undergraduate students having completed three years on home campus can go to the other university to study two years for a master’s degree.

The joint program not only provides students with chances of academic exchange, but also promotes research and cooperation in modern engineering and its application between the two universities.

It is therefore significant in promoting the internationalization of the two universities and the cultivation of professionals with an international vision and problem-solving abilities.

The two sides agreed to share, at the earliest convenience, plans on the cultivation of innovation and entrepreneurship, student summer research programs, full-semester student exchange programs and internationalized teacher education.