Nanjing University’s vice president Wang Zhenlin, also a member of the university’s CPC standing committee member met Akio Isomata, consul-general of Japan in Shanghai, and his delegation on Xianlin Campus in the afternoon of November 26. 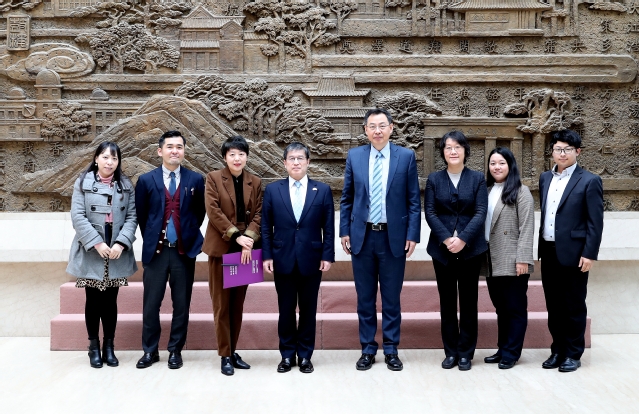 The university’s leader and the Japanese diplomat agreed with each other on matters of further strengthening the cooperation of top universities and the exchange of young people between China and Japan.

Wang extended his welcome to Consul-General Isomata for his new visit to the university.

He pointed out that during the fight with the COVID-19 pandemic, the governments and the people from China and Japan worked together to write a much-told story that “we have different mountains and rivers, but we see the same bright moon as we look up in the sky.”

In the post-pandemic era, Wang emphasized, this Sino-Japanese traditional friendship will continue in cultural exchange, and Nanjing University looks forward to promoting mutual understanding and trust between young people of the two countries through cultural and educational exchange.

The year 2020, he said, is also the “China-Japan Cultural and Sports Exchange Promotion Year,” and the consulate will continue to promote two-way exchange between people of younger generations of the two countries so as to inject new vitality into the two countries’ cooperation in the new era.

Also present at the meeting were teachers of the Japanese Department of the School of Foreign Studies and the representatives of the International Office.

After the meeting, Isomata gave a lecture to the university’s teachers and students on the title of “Facing Mature Japan-China Relations in a ‘New Era’: Possibilities for Expanding Cooperation and Exchange.”

In the lecture, he emphasized that the two countries have maintained a stable relationship and must share their international responsibility, and that they should strengthen mutual understanding and trust and promote common interests in building a long-term, mature and stable relationship of friendship and cooperation in the new era.

The lecture was presided over by Hu Jie, deputy director of the Office of International Cooperation and Exchange, and was attended by teachers and students from the Japanese Department of the School of Foreign Studies, School of Social and Behavioral Sciences, School of Government and other schools and departments.

On the morning of November 27, Japanese director Ryo Takeuchi gave a lecture on the title of “Riding the Winds and Breaking the Waves: Another Year in China for Japanese Documentary Filmmakers.”

The lecture was one of the China-Japan friendship and cultural exchange activities being promoted by the Consulate General of Japan in Shanghai.

Director Takeuchi is well known for his documentaries such as Anti-Pandemic Scenes in Nanjing,Long Time No See, Wuhan, and Sending You to Gaokao.

His lecture revealed many anecdotes behind these documentaries, which were all shot in 2020.

The lecture was chaired by Liu Dongbo, from the Japanese Department of the School of Foreign Studies.